Another good day to you all. I hope you all  are doing well and if not I hope it improves for you.

Anyway, do you know of Blind Tom? I wanted to know just how many of you have heard of this genius pianist? If you have not heard of him then great! I wanted to briefly share his story with you all and, of course, my own thoughts and opinions if you have the time.

Thomas Wiggins also is known as ‘Blind Tom‘ was known to be a genius pianist in his time during the 19th century. I just recently learned about him and, to be honest, it was a pretty interesting but sad story. 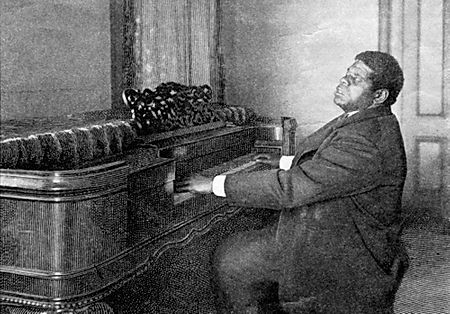 The headline of the article I read about Blind Tom wrote that “Blind Tom, born a slave, at the age of 10 becomes the highest-paid pianist of the 19th Century”. The title of that article was the only thing that I really took issue with. In my opinion, it is not worded correctly because it gives the impression that he was actually getting paid, when in fact, he was not getting any of that money he was earning playing the piano night and day. At the end of the day, he was still a slave despite him being gifted and talented young black boy. All of that hard-earned money went to his slave owner and his family. Not a single dime went to Tom or Tom’s family. That is why many black people do not have generational wealth and continue to struggle even until today because all the money, wealth and resources our ancestor’s sweat, bled and died for went to their slave owners and the slave owner’s family. How sad is that?

Therefore, people who claim to get over slavery and that it does not affect us today apparently do not know their history well enough and how the effects of history still linger on. Just because we may no longer be slaves does not mean that history does nor still affect us as people, as a community and as a society.

Also, no matter how talented or good he may have been it was no good for any racist when they all think you are worthless and they all think they are better than you as this other piece quoted from the article reads: “Nor did his music and talent convert many of the racists. When Tom went on tour in the South with Buthane, many of his performances were cancelled due to racist hostility.” Racists will always hate and be racist and nothing will change their mind about you no matter how good or talented you may be which is why I do not believe in the term ‘reverse racism’. Sure there is hate and prejudice among black people towards white people but black people do not have the means or power or a system designed to keep white people oppressed. Around the world whiteness is approved and rejoiced while darkness is looked down on and scorned.

Of course, there are some cases where some people change their racist’s ways but how often is that?  And to this day there are still people like this with the same type of mentality. No matter how “progressive” we become or claim to become, there will always be these types of people who will pass on their ingrained hate and sick mentality on to their kids and future generations. It really is sad.