Hello everyone! Is everyone doing alright? In a few days (more like 2 days) from now it will be the start of a new year. Is everyone ready for 2016? But, oh how quick the years are passing me by. Before I know what hit me I’ll be a wrinkly old woman, lol.

Well anyway, enough of that. Today’s Opinion Wednesday I want to talk about the inequality of the justice system especially with regards to how the rich are treated in comparison to the poor or your average middle class citizen. I’m pretty sure you know where this is heading… I am also quite certain a lot of you may have already heard the name Ethan Couch before. The ‘affluenza’ brat, anyone?

I remember when this story first came out. I was thinking he deserved any heavy punishment that was coming his way. However, after hearing how he was sentenced to get treatment for his ‘affluenza’ and 10 years probation but would receive no jail time, you can imagine how upset I was. He killed 4 people and severely injured 2 others, stole alcohol from a store and then proceeded to drive while drunk causing the accident, and this was all he was getting?! He pretty much just got a tap on the wrist by the court and all because he is a rich kid? While the average citizen or a poor person (or a minority for that matter) who would have done the same exact thing would have gotten years in prison! How is this right?

Also, didn’t the same judge, Jean Boyde, who sentenced him to 10 years probation sentenced then 16 year old Eric Bradlee Miller to 20 years in prison for the same exact thing about almost a decade ago?

Another boy about 3 to 4 years ago was also sent to a juvenile detention by the same judge to 10 years in prison for giving a single punch to a man which resulted in him dying a few days later. There were only two difference between these two people and Ethan: 1. They both only  accidentally killed one person while Ethan Couch killed 4 and severely injured two others and 2. They both was not rich like our dear boy Ethan is.

So do not dare come and tell me it did not have anything to do with money. I bet that judge was getting paid under the table while the victims families are left to pick up the pieces without so much as an apology from this kid!; And another victim, Sergio Molina, was severely injured. The then 16 year old who was supposedly Ethan’s friend and was in the back of the pickup truck Ethan was driving, will forever be paralyzed. And this rich kid will just walk away scott free? How is this justice!? 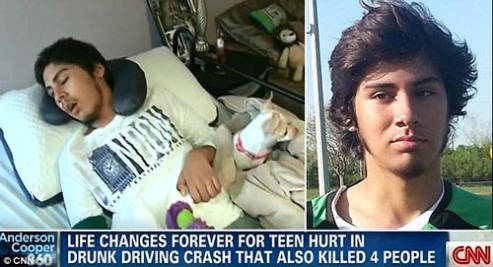 Anyway, that was what I thought back then. A few days ago I read on the Huffington Post’s website that the boy, who is now 18, and his mother had went missing about a month ago and they were later found in Mexico where they are being detained. I would have jumped for joy but I was at work at the time, so I had to refrain. I hope this time around he would get his just deserts. Any chance he had of going scot free with his affluenza case flew out of the window and I am happy. Unless the court accepts getting paid again to turn a blind eye. Once he’s thrown in jail I bet he would get over his affluenza fast enough.

3 thoughts on “The unequal justice system”